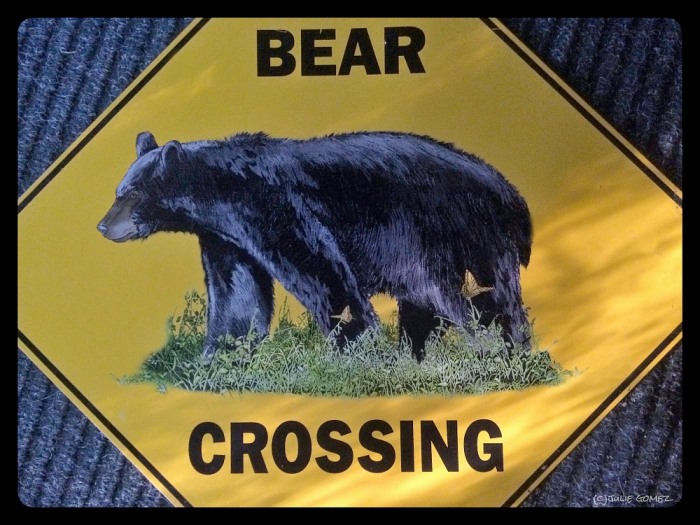 “The rule about bears is their unpredictability.” —Anonymous

Bears frequent our woods year-round, October is when they are most active.  Most of the time, we never see them.  This doesn’t mean they’re not around it just means that we don’t see evidence of them. Bear activity around our place decreased dramatically when we replaced our ordinary garbage can with a bear proof one in 2011. But that was about to change . . .

This year, weather in western Oregon was very mild; a pleasant change from all the rain. But with that, many native plants flowered and produced early fruits and seeds; several months early in some instances. I saw wildflowers in late winter. By early summer, many fruits and seeds had come and gone, and leaves were turning fall colors in mid July. It is likely the shortage of wild foods that brought the bear close to home. A friend who works for the US Forest Service in Washington State also noticed an increase of bear activity in her neck-of-the-woods. She agrees that the plants produced too early leaving the bears hungrier than usual.

The first bear incident was July 19.  About 3:00 a.m., I woke from a sound sleep to a commotion coming from the backyard. It had been a very warm night. The kitchen window was open, and I’d put a fan in front of the screen at the back door. Initially thinking it was raccoons in the yard, I didn’t bother with a porch light and yelled out the window for them to “Knock-it-off!” But, the chaos coming from the darkness suggested something more, something other than a handful of raccoons. Yet, my sleep-deprived brain wouldn’t allow me to ponder, and I shrugged it off and went back to bed.

In the morning, my suspicions were right. It wasn’t raccoons in the yard, but a hungry black bear. In eighteen years of mountain living, never has a bear climbed our six-foot cyclone fence. The first thing I noticed was the seven-foot, steel post with a metal bird feeder; it had been lifted two feet out of the ground where it now lay. I had just filled it with five pounds of black oil sunflower seeds, and every seed was gone. Then there was the fence. An entire six-foot section along the bottom was pushed out three feet. Metal rings that secure the fence to the ground wire were gone. When I yelled, the bear must have panicked, trying to push through the fence instead of climbing over it. But even more unnerving, is that the bear could have busted through the screen door and gotten inside the house.  Thank goodness, it didn’t.

The second bear incident happened on August 11. It was again around 3:00 a.m., and another warm night with the windows opened (but not the door). I woke to the sound of gravel being shuffled around. Someone or something was moving about the carport. When I heard nothing more, I fell back to sleep, but not for long. Moments later, I was wide awake listening to the bear can being tossed around. In the morning, I found it on its side, unopened. (Works like a charm!)

The last bear occurrence to date, was an encounter. It was August 23, and a very warm day. At 2:00 p.m., I went outside with an iced coffee, and to catch up on some reading. I’d spent the morning hauling and spreading gravel, and it felt good to relax. I enjoyed the cool north wind, and found the rattling of maple leaves soothing. I glanced at my watch, and it was 2:30 p.m.  I turned to the third page of chapter six when I heard a faint scrape in the gravel. I looked up, and saw a black bear standing thirty feet away!  The bear took several pigeon-toed steps dragging its claws across the gravel.  The bear then stopped and sniffed the bear can. With mouth open, I could see a bright pink tongue. This was the most beautiful bear I’d ever seen. The animal was lean and muscular, and its coat was immaculate. It looked like a young bear, about three or four years old.

My adrenaline shot through the roof! There was nowhere to escape except onto the deck. I was downwind. The bear hadn’t seen, heard, or smelled me. There was no telling what the bear might do, but I wasn’t waiting around to find out. I stood up, and went to step onto the deck when my leg bumped the chair and scraped the patio. When I looked back, the bear was gone. While it might seem that it took a while for all this to play out, it didn’t.  It was over in twelve seconds.

Bears are unpredictable, and every encounter is different. This bold, young bear was obviously driven by hunger, and I was grateful the animal had enough fear to run. I wanted to run too, but that’s a big No-No!  Though shaken, I was proud of myself for not acting hastily, and not running. I’d always wondered about that. I do wish I could have gotten a photograph, but safety comes first. It’s eerie how fast and stealthy a bear moves and disappears. It was if he were never there, but he was.  From that day on, I don’t go into the woods without my certified canister of Bear Spray.