At home, I love reaching out into the absolute silence, when you can hear the owl or the wind.  —Amanda Harlech

It was in November, and I was outside enjoying a rare, mild, winter evening, when something amazing happened! From the pitch-dark forest, an owl silently swooped in, landing on a branch eight feet from where I stood on the deck. The owl, highlighted by the porch light, clutched a cedar branch with fist-sized talons, and ruffled his feathers; I say him, because males are smaller than females. He then folded his wings and relaxed without a sound.

It was the barred owl (Strix varia) aka hoot owl. Smaller than the great-horned owl (Bubo virginianus) the barred owl is a stocky, round owl with no ear tufts, and brown eyes that are almost black. The owls voice, is a mix of various hoots and caterwauling, but can also be as musical as a songbird when singing Who cooks for you? Who cooks for you all? In the wild, a barred owl can live more than twenty years. Native to eastern North America, the barred owl has expanded its range to the forests of the Pacific Northwest where it sometimes competes with our native, rare, spotted owl (Strix occidentalis). But the barred owl is not entirely to blame. Humans, as usual, are the main cause for the spotted owls decline as old growth forests, which the spotted owl depends, are lost to logging.

The barred owl and spotted owl look very similar. The easiest way to tell them apart is by looking at the belly—the barred owl is streaked with bars, while the spotted owl is dappled with spots. Keep in mind, the odds of meeting a spotted owl are slim because unless you live near or frequent an old growth forest, chances are, you will probably never meet one. But, I’m an optimist and believe in “never say never”—a phrase first recorded in Charles Dickens’s Pickwick Papers 1837. For me, never included bobcat, pine martin, Calypso orchid, and the Oregon slender salamander, all which I have seen in our woods. As for the spotted owl? I’m still waiting, but I will never say never.

So there we were, the barred owl and I, in the glow of the porch light. As the camera flashed I thought the owl would take flight, but instead, he stayed perched, completely relaxed with uncanny tameness. Even in half-light, he was gorgeous! Occasionally our eyes met, but mostly the owl’s attention focused on the ground listening to what must have been a mouse, or shrew sifting through dried leaves. I thought he might pounce, but for whatever the reason, he only listened. After twenty minutes, the owl released the branch and took to the air, flapping into the night as silently as he appeared. 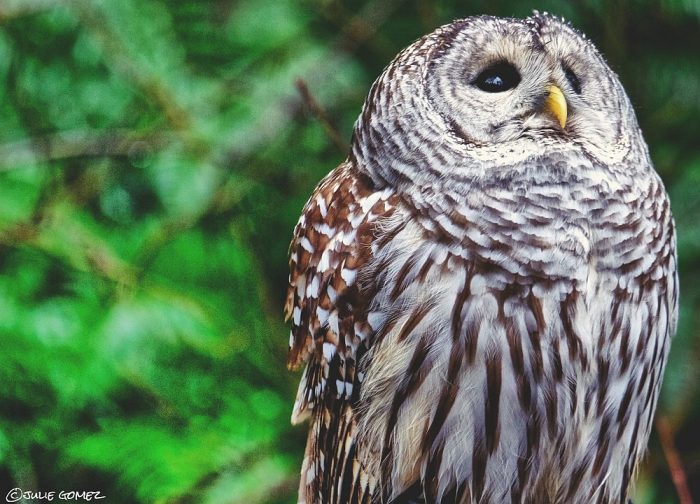 Two weeks later, in December, the owl returned, but this time, in broad daylight! Barred owls are said to be night owls, but this one obviously didn’t read the guidebook. The owl silently swooped in landing on the fence while I was filling bird feeders. Just feet away, he showed no fear. His demeanor was so relaxed, that he started preening and ruffling his feathers. It was amazing! I could hardly believe what I was seeing. It was as though we’d been friends for years. I slowly backed away so not to crowd him, and went in the house to fetch my camera. Expecting him to be gone when I returned, I found him still sitting on the fence. The owl allowed me to rejoin him in the yard, where he tolerated me and my camera for ten solid minutes. It was a wild moment I will not forget, and will forever cherish.