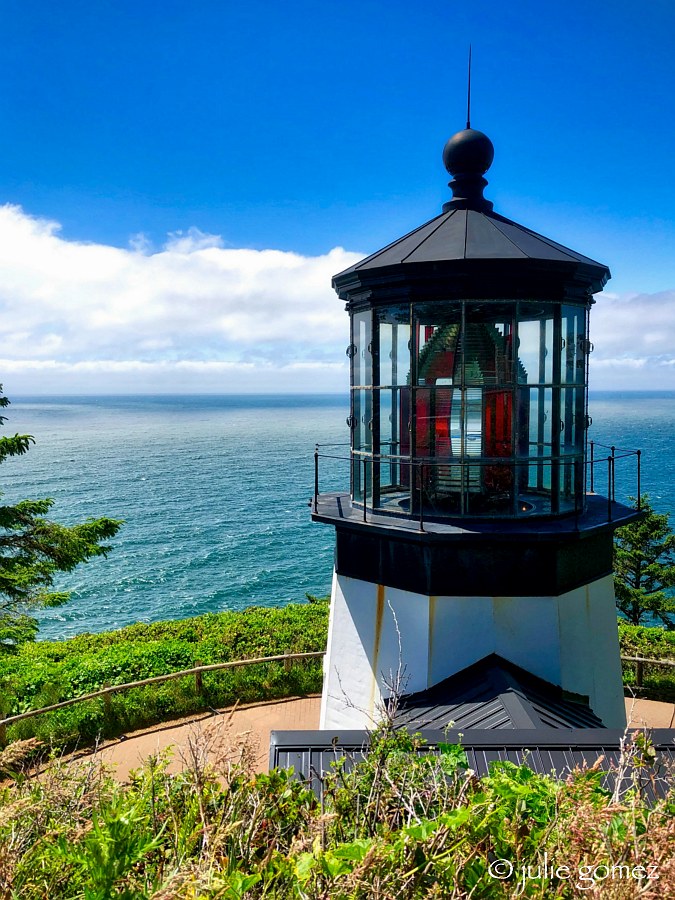 I am a lighthouse worn by the weather and the waves.  I keep my lamp lit to warn the sailors on their way.  —Nickel Creek, Musician —The Lighthouse’s Tale

It’s been two years since our last visit to Cape Meares, Oregon.  This time, the views were far better than the smoke-filled skies of 2020.  This time, the skies were cloudless.  The wind was strong and fresh, exhilarating!  The sea alive with whitecaps, was the most vivid shade of azure I have ever seen.  I would explore alone.  Chris stayed behind.  He had just been to the chiropractor and needed to rest before his big fishing day at sea that would send him back to the chiropractor.

A summer south-west wind was blowing strongly battering the headlands.  The spruce forest shook to its roots.  The air was ice-cold, and sweatshirt worthy.  Summer weather along the North Oregon Coast is fantastic!  It will have you donning t-shirts one day, and hats and sweaters the next.  While the headland provided plenty of shade, there was no escaping the wind.  I stopped to do some birdwatching and realized I had left my Nocs Provisions in my backpack; I left my backpack with Chris.  There would be no peregrine sightings today. 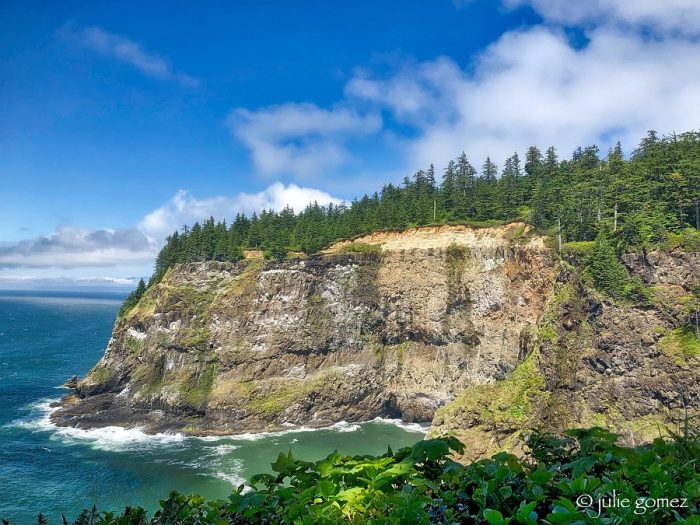 The Headland, where the peregrines live

I gazed at the sea, soothed by the rise, and fall of lulling deep breaths.  Whitecaps multiplied as they migrated north.  At Pillar and Pyramid Rocks, seawater churned vibrant shades of aquamarine.  These rock sanctuaries host numerous seabirds from Brandt’s cormorants and tufted puffins, to common murres, and brown pelicans.  Their underwater habitat supports a myriad of sea creatures.  The rocks are protected areas, and part of the Oregon Islands National Wildlife Refuge. 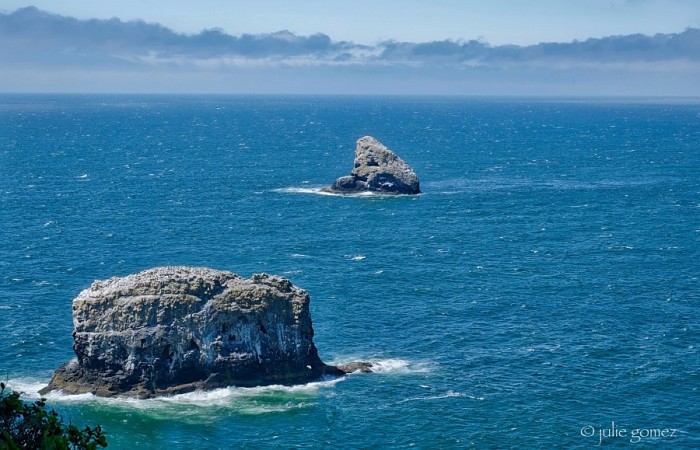 The top of the lighthouse was visible just below the path.  A short switchback edged with giant sword ferns and salal shrubs led to its entrance perched 217 feet above the sea.  This time, the lighthouse was open, but I didn’t go in.  Again, I had left my wallet in my backpack that I left with Chris.  So I walked the perimeter taking in the view, and it was marvelous. 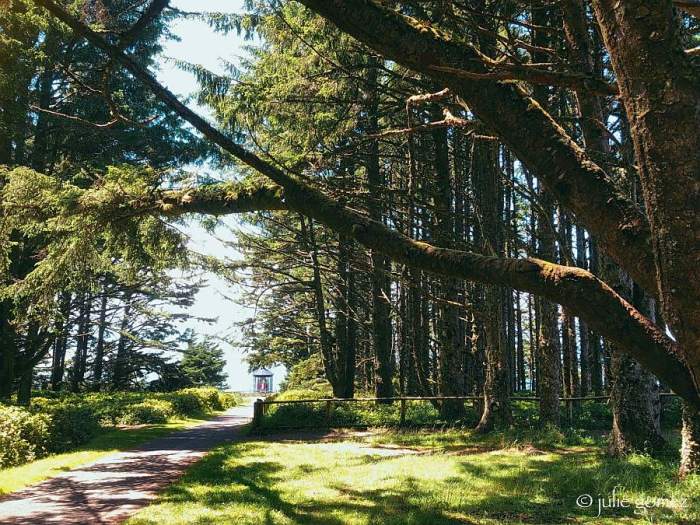 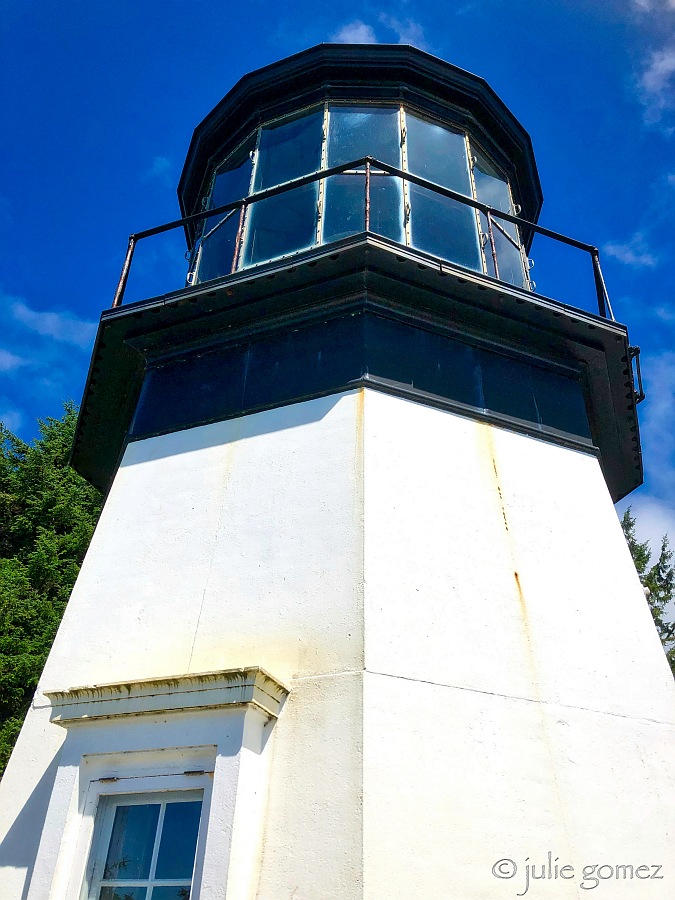 It was time to head back.  The sun was blazing, and the wind howled.  At the top of the switchback I paused to have another look.  It was that moment that a white-crowned sparrow hopped from the salal and burst into sing.  A song louder than the wind and waves combined.  I don’t know what it was, but something about the little bird and his song melted my heart.  I had to step back to fit him in my zoom lens.  He just kept on singing.  (Not until later that evening while sifting through photos did I realize he was missing his left foot.)  I knew there was something extra special about him. 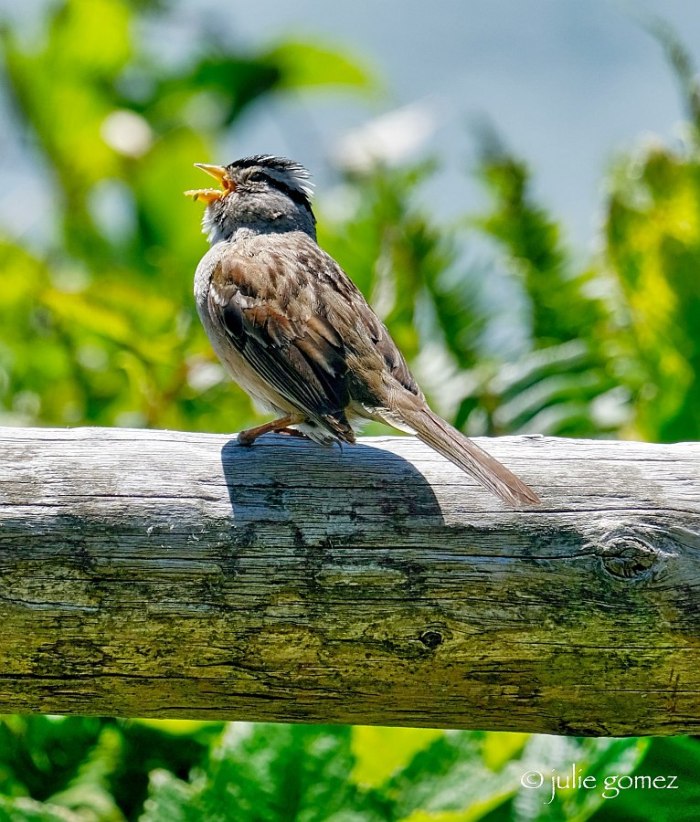 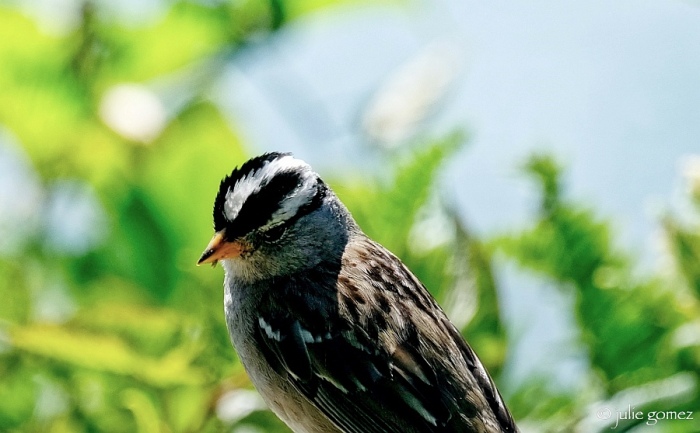 Heading back, the incline was gradual, but uphill all the way.  About halfway, a dirt path lead through the woods, so I took it.  A huge gust of wind came up tossing the trees left and right.  Trees and wind are a terrible mix, so I didn’t dally.  In haste, I threw a sandal on a tree root. 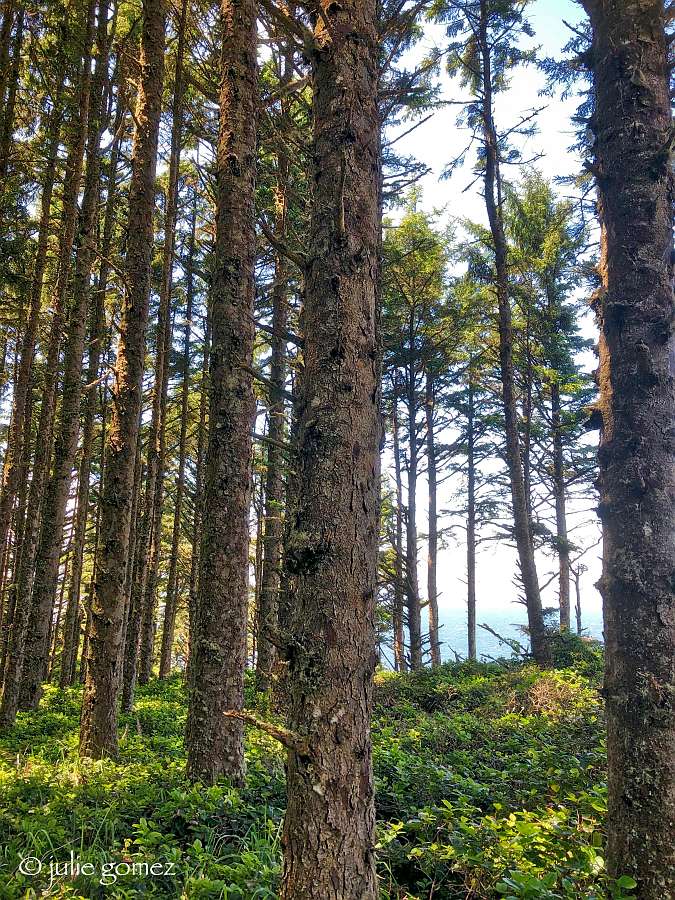 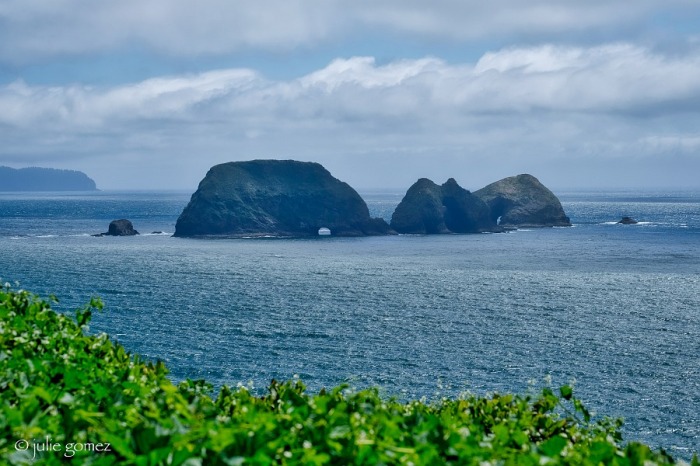 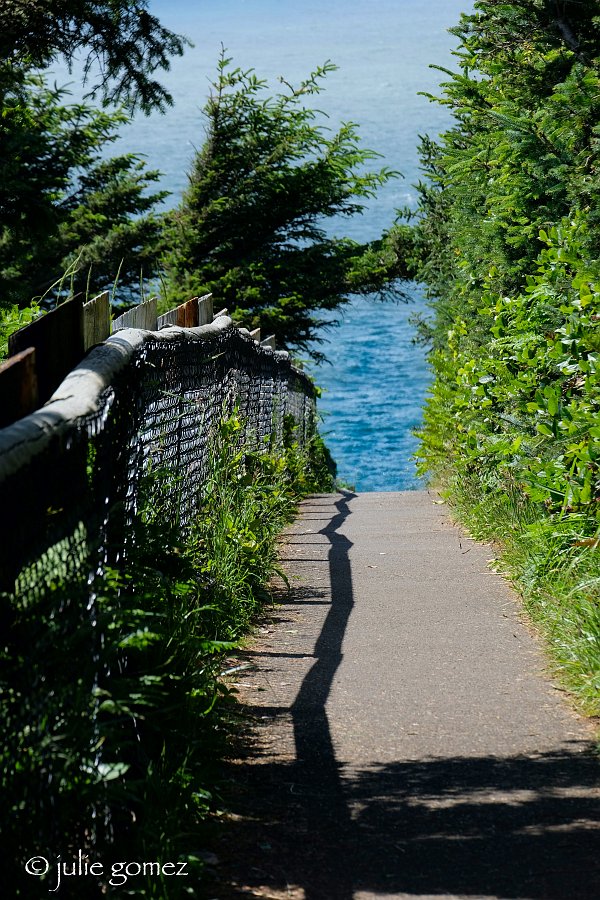 Soon, I was back on a paved path this time on the south-side of the headland.  Although the views were breathtaking, the path was narrow, and steep.  There was little shade, and the sun was intense.  I quickly overheated.  I had to rest once, and was relieved when I finally reached the parking lot where Chris was waiting with a canteen of ice water.

Note:  Our weeklong coast adventure was more than what we bargained for.  Someone tried to syphon diesel from our truck, they didn’t get any, but left the cap ajar.  Unknowingly, we washed the truck, and a little water seeped into the fuel system.  It took three days to fix.  We replaced new fuel filters with, yes, brand-new fuel filters and prevented transmission damage.  Chris kept his fishing date, fishing off the coast from Garibaldi to Manzanita.  He returned with pounds of ocean-caught, dungeness crab, black rockfish, one yellow-fin, and a sunburn.  On our last day, we both came down with Covid, a miserable head cold, sore throat, light body aches for a day and a half, and three days loss of taste and smell.  At home, we rested, drank plenty of fluids, took prescribed Z-Pack, quarantined for a week, and have fully recovered.  It was a trip we won’t soon  forget.