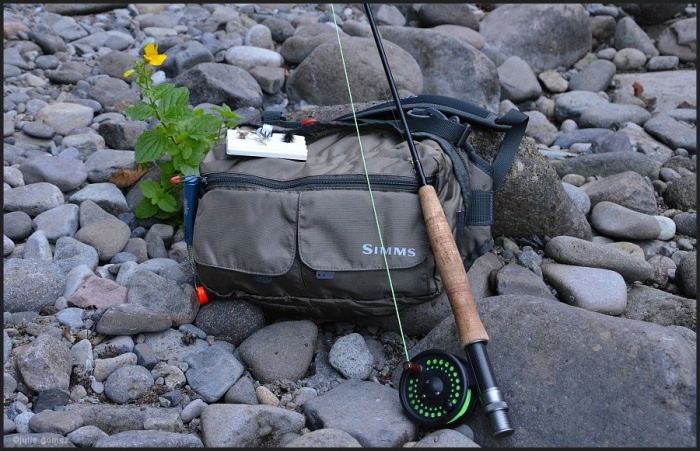 There are so many things I love about mountain living; it’s hard to know where to begin.  So I think I will start by saying that wild rivers are at the top of my list.  I’m talking barrier-free, untamed rivers borne of glaciers that like people have their own behaviors and moods.

One of my favorites is the wild and scenic Salmon River.  A tributary of the Sandy River, it is a river that is recognized for its outstanding scenic beauty, old-growth forests, consistent mood, and cold clear waters.  From the foot of Mount Hood’s Palmer Glacier, the Salmon River begins its 33.9-mile-long journey down the mountain.  Once down the steep and rugged slopes, the Salmon River meets Redtop Meadow that filters the water of impurities, such as glacier flour that turn rivers the color of milk.  From Redtop Meadow, the Salmon River enters a spectacular rugged, forested canyon where a number of waterfalls occur that few have ever seen, including me!  Along its lower reach, the river flows between Hunchback Mountain and Salmon Mountain (part of the Salmon-Huckleberry Wilderness) and joins the Sandy River in the small mountain town of Brightwood.

So what should one expect from a wild river?  Wild fish, of course!  But it just wasn’t so.  In the fall of 1997, the year that marked our start as mountain dwellers, fishing along the Salmon River was, well, pretty lousy.  Few anadromous fish were making their way to the spawning redds, a problem that began 100 years ago, and that progressively worsened.  The cause was Marmot Dam.  Built on the Sandy River in 1908 (below Brightwood and the Salmon River confluence) the 47-foot-high, 195-foot-wide dam proved a major obstacle.  Despite fish ladders, resident trout, and anadromous steelhead and salmon numbers dwindled.

The negative impact the dam caused to native fish populations proved consistent with our inability to catch them.  Some locals we spoke to insisted there were no fish at all in the river.  What a shame had it been true, but thankfully, they were wrong.  There were fish.  Not many, but there were fish.  I know because I saw them.  Chris saw them too!  In the canyon, in a deep shaded pool, steelhead frolicked in unison, rising and diving like porpoises.  It was one of the most enthralling sights I’d ever seen.  It was like finding a pot of gold at the end of a rainbow!

That was more than ten years ago, and a lot has changed since then.  In 2007, Marmot Dam was removed from the Sandy River.  Fish could again swim freely upriver.  We too looked forward to catching wild trout from a wild river.  We grabbed our fly rods and headed over.  Through the canyon the river flowed.  In the shade of the conifers the air was cool and pleasant, and smelled of fir and cedar; it was all very alluring.  The trail to the river was narrow and crowded with head-high salmonberry bushes that had been picked clean by birds.  As I waded through them, I unknowingly picked up a hitchhiker—a large, but harmless, long-jawed orb weaver that rested peacefully on my fly pack, and that I carefully transferred back to the bushes.

We chose a lovely shade dappled pool between a set of rapids.  Across the river unsightly fishing line hung from the trees like strands of spider silk; a keen reminder to make short casts.  We looked for rises, but saw none.  Gnat hatches were stirring, but were short-lived.  I love fishing dry flies, so that’s what I fished.  Who knows, maybe I could get the trout to rise.  Trying to outsmart a lazy hatchery trout was one thing, but these trout were pure unspoiled wildness, and likely wouldn’t pass up a good meal.

Chris chose a barbless #10 Yellow Humpy, while I tied on a barbless #10 Crane fly.  I left Chris to fish the bigger, deeper pool, while I trudged upriver to a narrow slot at the foot of a small rapid that would require short casts with short drifts.  Stepping into the river made me forget about the 80-degree heat.  The cool breeze coming through the canyon also helped.

On my third cast, I had a fish on!  A stunning wild rainbow, and though it didn’t break the surface, it sure felt good on my 3 weight, ‘7.6” 4 PC. Temple Fork.  I brought the trout to-hand, a trout of average size, but still a beauty nonetheless.  I slipped the #10 Crane Fly from its lip, and released it back to the river.  I looked over at Chris, and saw that he wasn’t doing too shabby either.  He’d hooked a feisty native rainbow that did a fabulous tail-dance across the river.  After a marvelous play, he brought the 1-pound rainbow to the shallows.  Slipping a wet hand underneath the trout’s belly, I removed the fly, and released the trout back to the wild water.

It was starting to get late and the mosquitoes were starting to bite.  Wanting to make a few more casts before calling it a day, I quickly switched flies—a #10 Yellow Humpy.  No sooner had the fly touched the water that I hooked my second wild rainbow!  This one hit like a freight train.  A true fighter.  I felt every fiber of its being transmit through my line, rod and reel, and to my fingertips.  This trout took some finesse to bring it to the shallows, where even there it thrashed.  What a beauty!  This trout was bigger than my first, and just slightly smaller than the one Chris had just caught and released.  A fat trout, it weighed close to, if not a pound.  I released the trout, and watched it swim away.  It was a good day along the river, and we walked away smiling.

🌿I hope you’ve enjoyed this article, and thank you for reading Nature Chronicles.

🌿To read more about the Salmon River visit my blog post “A Morning Hike Through Mount Hood’s Salmon River Gorge.”

2 thoughts on “A Wild River and Wild Trout”

This site uses Akismet to reduce spam. Learn how your comment data is processed.