I heard a bird sing

In the dark of December

And sweet to remember.

They arrived October 1, right on schedule; the varied thrush (Ixoreus naevius)—a beautiful orange and black bird that sings the most whimsical song that sounds like flutes and chimes.

In Oregon, the varied thrush is a year-round resident, and short distance migrant. The birds return to low elevation forests in autumn where they will stay until spring. Here they find a welcoming mat of leaves. With their beaks, they flip the leaves like pancakes to uncover hidden insects. But this time, the birds found very few leaves on the ground. Unseasonably dry, warm weather had encouraged the trees to hold their leaves longer. Of course, the birds would not go hungry, but it did mean that they would have to work a little harder. There were oodles of bugs underneath the forest litter; all they had to do was scratch for them. And they did!   It wasn’t until December, and two snowfalls later that the trees were bare of leaves. Meanwhile, the varied thrushes were growing in number. In fact, during one of our coldest days in November, I counted eighteen of them!

It was also on that cold November day that I performed a bird rescue. I didn’t hear the varied thrush hit the window, but found her shortly after resting near the sliding glass door that leads to our back deck. Lucky for her, I’d gone to the kitchen for a cup of coffee. Outside, the mercury read twenty-two degrees, and I knew I had to act fast. I bent down and carefully, picked her up. No broken bones, thank goodness. I cupped my hands around her gently to keep her warm and calm. She struggled slightly, and then settled quietly in my hands. Some prefer to put stunned birds inside a shoebox or paper bag (pocked with ventilation holes, of course, and lined with shredded newspaper) until they recover. I’ve tried these methods that for me, have not been very successful, so instead I use my hands.

She shouldn’t have hit the window; Lord knows there are enough obstacles that should have prevented this. There are feeders and wind chimes, table and chairs, a trash bin, and the glass doors have screens and double panes. Ten minutes had passed, and I really was starting to feel the cold. I didn’t take her indoors, because I didn’t want the sudden temperature change to kill her. She felt so light in my hands; a precious package. Her feathers were softer than the finest silk. Her warmth kept my hands from freezing.

With her eyes half-opened, she rested.

Trying to not think about the cold, I thought of what might have sent her into such panic. I worked to put the pieces together. On the glass door, a few small feathers stuck. Her impact happened a foot and a half above the bottom of the door, and two feet from a trash bin. I doubt she mistook the glass for reflections of the forest. No. Her fright-flight was caused by something else, most likely a hawk. I had seen a juvenile red-tailed hawk a few days later. Unlike the robin-sized sharp-shinned hawk, and the crow-sized Cooper’s hawk, red-tailed hawks are not agile hunters in the forest. But what a red-tailed lacks in speed, it swaps for brainpower. For instance, a red-tailed hawk may flush the songbirds. In panic, they scatter. If all goes well for the hawk, a songbird hits a window, is knocked senseless, and the hawk has its meal. Not bad for a bird whose brain is no bigger than its own eyeball. Because the hawk was a juvenile and lacked experience, it did not get its bird.

Except for the feathery warmth in my hands, I was getting colder by the second. I spoke softly to the Varied. I told her everything would be ok. I pulled my left hand away that had gently covered her. She tipped her head, looking one way, and then the other. Gently, I caressed the back of her head and neck. Her eyes closed. She seemed to be enjoying the pampered treatment. Only when I stopped, did she open her eyes. They were wide and bright. She was more alert. I stretched out my arm. She shifted a little, and then settled back into my hand. That’s right Varied, I said to myself. Make yourself more comfortable. You don’t know that my arm is breaking-tired, and that I’m freezing to death!

Then suddenly, she stood. It had been twenty minutes. I felt her small, sharp claws pressing into my hand. She looked to the left, then to the right, and lifted off straight away! What happened next, surprised me. She didn’t fly for cover, but landed six feet away on the fence. She turned and looked at me, as if she couldn’t believe what had happened. Perhaps she was thanking me. Yes, I believe she was. And with joy in my heart, I wished my feathered friend well. 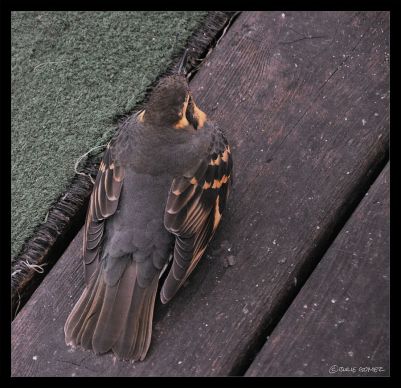 Varied Thrush in need of a helping hand 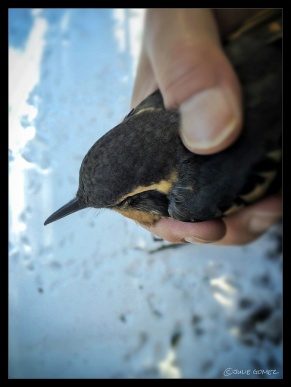 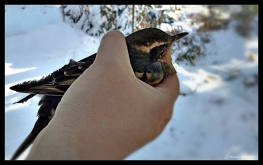 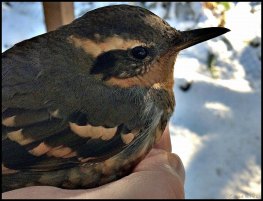 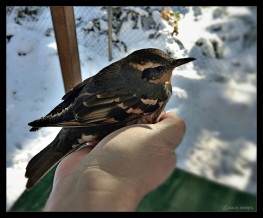 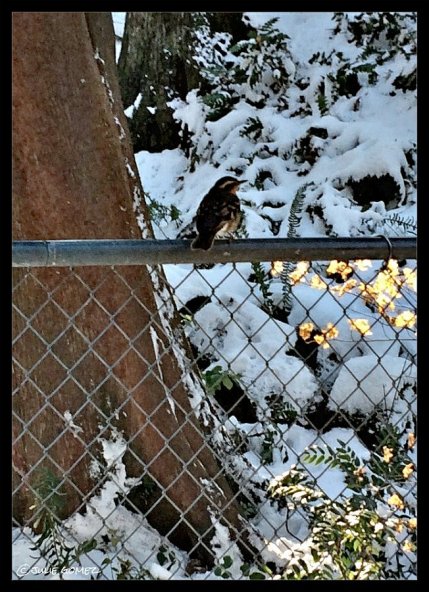 On the fence, rescue complete!

6 thoughts on “A Bird in the Hand”

This site uses Akismet to reduce spam. Learn how your comment data is processed.