The beach is not only a sweep of sand, but shells of sea creatures, the sea glass, the seaweed, the incongruous objects washed up by the ocean. —Henry Anatole Grunwald (1922-2005)

It was a lovely morning as we pulled into Shore Acres State Park.  Our purpose was to explore Simpson Beach—a secluded, enchanting beach 100 feet below the sandstone cliffs.

We love this beach.  It’s never crowded.  Often, we have it to ourselves.  We took the trailhead from the parking lot through a pine-spruce forest that had recently been pruned.  Through the woods, and beyond the cliffs, the surf was booming. Pine needles whispered in the breeze.  As the fog lifted, the sun-warmed air smelled of seaweed with a zest of pine and spruce.  I breathed deeply their aromatherapy.

At the edge of the cliff, I leaned my pack against the roots of a large spruce tree that jutted from the yellow sandstone like arms reaching for the sea.  The view was breathtaking!  Ahead, a staircase rejoined the trail that led through a shrub tunnel to the beach.  I could hear the gentle trickle of the creek.  First Creek has many arteries that pumps water just below the sand making it very squishy in places.

For such a small beach, there’s a lot going on here.  The sand is not your typical gray, but is instead a blend of crushed shells that reflect vibrant golden hues.  The geology of the area is remarkable.  More than 1,200 years ago the Pacific Ocean plate collided with the western edge of North America that caused a massive earthquake.  The quake was unimaginable that dropped the coastline five feet.  Huge slabs of sedimentary rock heaved upward.  These rocks now point west at a 45 degree angle.  They can be seen along with remnants of buried forests, between Sunset Bay, Shore Acres, and Cape Arago.

At the mouth of First Creek, were large concretions; a common geological phenomenon that occurs when freshwater minerals crystallize a host in soft sediment.  The host could be a shell, a pebble, a dead crab, or even plant material.  Once crystallized, sand grains progressively bind to the host that grows into various shapes and sizes, hardness, and color.  Most are round, some oblong.  Some are small, others massive.  Most are hard as stone.  Color varies from beige to gray to black.  Concretions take shape in sedimentary rock—sandstone, siltstone, mudstone, limestone, and shale.  Abundant between Sunset Bay to Cape Arago, they also occur among coastal inland lakes, rivers, streams and slide areas.  The Latin name concrescere means “grow together.”

The waves swept over the tide pools limiting our access to the wonderful sea creatures that live here.  One tide pool creature I wanted to see again, was the mossy chiton (Mopalia muscosa); a small sea mollusk with eight body plates that range in shades of black to gray to olive-green. The body plates (often green with algae) have a thick fringe of rubbery hairs that mimic moss.  Their superb camouflage, combined with their small size (1.6 to 2.2 inches long) makes them very hard to spot, even at low tide.  At night, at high tide, they move across the rocks to feed on red algae such as Turkish washcloth (Mastocarpus papillatus) and nailbrush seaweed, aka turfweed (Endocladia muricata); they also have an appetite for the green algae, Cladophora.

The tide was coming in fast ending our tide pooling expedition.  So, we turned our attention to the strandline and finished the day collecting sea treasures with photos.

History:  Simpson Beach is part of Shore Acres State Park with 745 acres of beaches, sandstone bluffs, and coast rainforest.  In 1906, timber baron Louis Simpson (1877-1949) purchased the estate (Shore Acres) for his wife Cassandra who died in 1921 from kidney failure.  Before her death, the Simpson’s often held lavish parties.  Their three-story mansion was most accommodating with fifteen guest rooms, a 75-foot ballroom, and an indoor heated pool in the basement.  On the grounds were a tennis court, and lavish gardens.  In 1930, the Simpson mansion burned to the ground.  Another, the Manor House was soon in the works, but never finished.  In 1942, the Simpson family donated the property to the state.  After WWII, remnants of the Manor House were torn down.  The Simpson children’s playroom was salvaged and moved to the garden where today it houses the park manager.  Remnants of the tennis court are visible north of the grounds along the bluff.  Other properties once owned by Louis Simpson are Sunset Bay and Cape Arago State Parks. 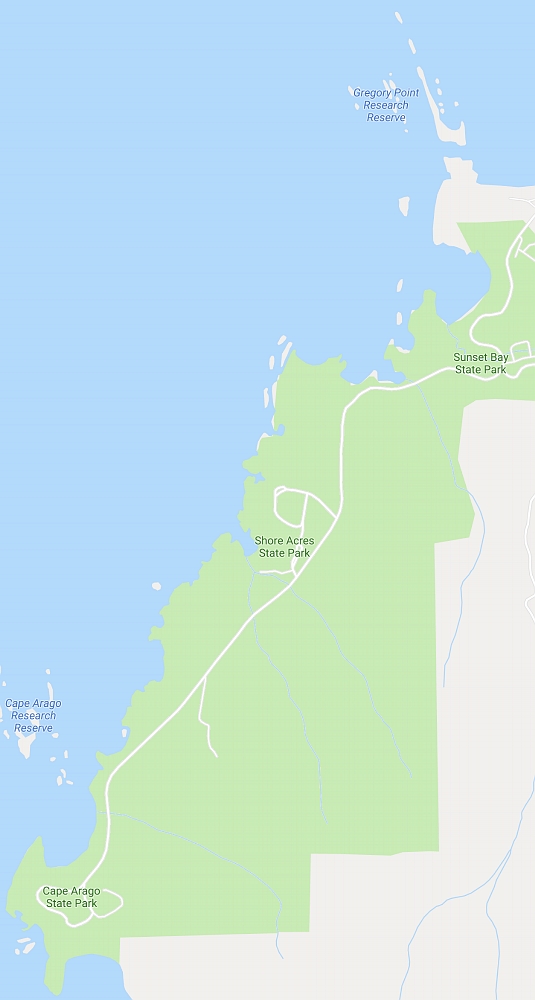